The first releasefrom the new album has been released for our fans. Yes, this is one of tracks produced by Chris Robinson, of the Black Crowes, and mixed by Paul Stacey.

Fresh for your ears...

You can also check out his music. Clockwise will be sharing the stage with us on August 8th at the Troubador in Hollywood.

Party of the Summer 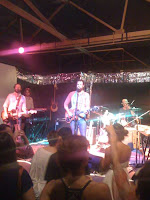 Sometime last month, the Beachwood Rockers, Johnny Crash, and Truth& Salvage got together and decided to throw one last party before TASCO left for the Black Crowes Tour. This couldn't be any ordinary party. It had to be epic.

Much in the fashion of the B.R.S., a secret location was chosen... a hideout of sorts... a place where a party of this magnitude could be thrown and not attract the attention of police. (A daunting task in Los Angeles)

The location: Johnny Crash's super swanky wood shop. But before the first beer could be consumed, the "Shop", as it is so affectionately called, had to be transformed into a suitable place to throw down.

Enter the brains and brawn of one John E. Crash. Along with his team of misfits and mad scientists, Johnny worked well into the early morning hours of saturday, July 25th.

A stage was assembled, lights were mounted, and the invitations went out.

Over 300 people showed up! Kegs were emptied, jigs were danced and rollies were rolled.

There were epic performances by many of Beachwood's finest including George Stanford. George really put on a helluva show treating us to some of our favorites and a couple of new surprises. Around 11:30pm, Truth and Salvage took the stage and did a short set including a few surprise covers. Finally, Andy Clockwise finished off the night with a gut punching set that set the tone for August 8th...complete with a sing along that found 19 people on stage harnessing the good vibes that Clockwise always delivers.

What happens on August 8th, you ask? Well... we will do it ONE MORE TIME. We are bringing this party to the Troubador in Hollywood for one last show before TaSCO hits the road for four months. The lineup will be George Stanford, Andy Clockwise, and Truth and Salvage Co. Get your tickets now and don't miss another party.

And alas...here are some wonderful pics from the party of the summer.
Posted by Adam Grace at 3:59 PM No comments: