40 hours to memphis with 48 hours to do it, talk radio, mobile wifi, little magic beans 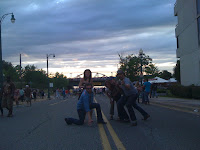 Alright furry friends we made it to Memphis at 3 am on Saturday, slept the sleep of the dream deprived, woke up and beat tracks to the Beale Street Music Festival for a day of humid happenings.
The night before Tennesee was inundated with rain showers and tornadoes, many acts cancelled or were cancelled. But come Sunday the clouds broke and the sun shined. We met up with our good friends Sue Waters and Brent from Truckee, CA, near Tahoe.
I was lucky to take this sub par shot of them. 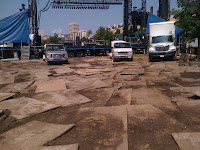 The grounds were were covered with plywood, or at least backstage was. the general crowd had to endure manure scented mud and most of them wore galoshes, (timmy calls them rubbers, smitty calls them gum boots, how bout you?) Anyway the festival was right on the banks of the Mighty Mississippi, and man was she swollen. The stage overlooked the river and the famous Memphis M bridge. 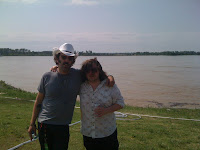 We had a great set, definitely got the crowd moving. I always like afternoon sets, the daylight makes it easy to connect with crowd. A lot of friends came from Los Angeles, like Memphis native here Jesse Cole, songwriting master. Definitely look him up.
We had a good ole time, it's really nice to be back South. 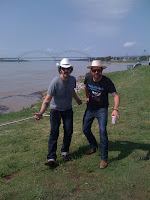 The river made a great backdrop.
We took advantage of the photo op to take some sizzling pics. 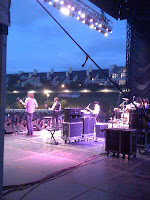 The highlight of the night was Band Of Horses who simply tore it up. It was super good to see our friends Bill Reynolds and Tyler Ramsey who play in the band, black cowboy hat and the tall long haired, respectively.
We have a long history with those two, who also hail from Asheville, NC. It was a prideful moment for us to see them setting the crowd a blaze. Hope to see them soon again along the way.
The night ended with legendary Leon Russell. I almost forgot he was playing until I heard "A Song For You" coming from the blues tent. What a treat. He followed with "Delta Lady" which is a total smash, I want to cover it. I was too taken to even think to snap a photo, too bad really because he is one colorful dude for wearing all white.
Currently driving to St Louis MO for a show at the Old Rock tonight. We would like to thank Lokast for supporting this tour with a mobile wifi router. I was streaming Netflix all the way through Oklahoma. Talk soon,
Peace
SK
Posted by Kinnebrew at 1:42 PM