Adam Grace here...I was looking over the thousands of photos taken last year and a few kept creeping back into my head. So I thought I would share them with you. These are from my personal collection and represent some of my very favorite pictures of the band. (Click the picture to enlarge) 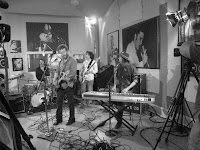 I love this shot... taken by Amanda G. at Sun Studios in Memphis. This room was where all the greats recorded... Elvis, Jerry Lee, etc. and here we are filming a TV show and recording songs. Notice the pics of Elvis staring down on Timmy as he focuses so intently. It's hard to take all of it in when your in the moment, but this shot says alot. 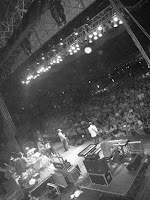 This shot was taken by Amanda G. in Little Rock Arkansas. I'm fond of it because you can really grasp what it's like to stand on a stage in front of 10,000 fans. I wish I could remember what song we were playing... but I do remember the feeling when we finished our set. The roar of the crowd... the smiling faces of my band members... it was pretty awesome. 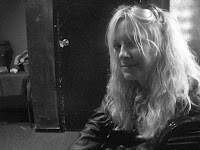 This is a shot I took backstage at the Fillmore in San Fran. Amanda G. is giving me a sly little look... and I know what it means. It was the last night of the Fillmore run with the Black Crowes and the last night of our 50-something dates with them. The entire tour was filled with exhaustion... highs and lows... and the look she's giving me is like, "I'm proud... I'm tired... and I love you." Pretty damn cool if you ask me. 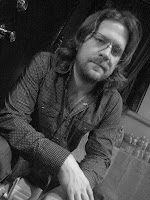 Amanda G. took this shot backstage at the Fillmore as well. I'm not sure what I like about it... because it is OF me. But I do know that I was waiting to take the stage... and a little nervous... and I didn't want to show it. 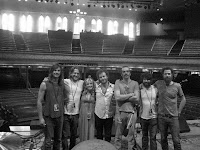 This shot was taken by one of Amanda G's friends. The whole band, plus Amanda, is onstage at the Ryman in Nashville. We had just finished soundcheck and we were very proud to be standing on that stage. That night we received two standing ovations during our set. 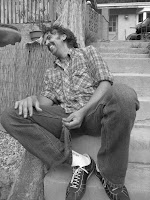 This is one of the earlier shots of Smitty that I took in late 2007. We were recording our Demo, which would lead to the record deal and working with Chris Robinson. We had our entire future to look forward to... and I cracked a joke about Smitty's socks. I caught him mid laugh. I love Smitty's laugh... 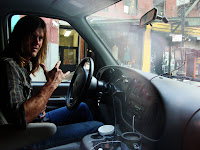 I took this in New York city. The thing I love about this photo is that it represents the basic philosophy of Walker Young. If you tell him there's a gig 5000 miles away and three people will be there... he says, "Let's do it!!!!!!" And he's behind the wheel and ready to roll. 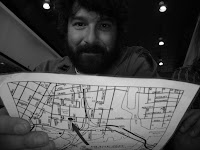 In this rare photo, Joe is smiling. Joe always said he didn't take a good picture. I think this is an exception to his rule. We were eating at a pizza joint in New York and had just started the tour. Notice the "you are here" dot on the menu. I miss you Joe.
More to come...
Posted by Adam Grace at 7:24 PM