Day Two had us passing through Olympia, don't know why I neglected to photograph that as I lived there for four years. The experience was surreal. 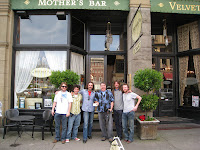 We played that night in Portland, in an awesome theatre named the Aladdin which we didn't photograph either. The show was excellent, the crowd was very responsive. Jackie's fans consist of a lot of true music fans, the setting of the show and the crowd and the music definitely had a timeless sense to it. It was great. We stayed at the Jupiter Hotel in Portland which has chalk board doors which we utilized by drawing and consequently writing a new hit. 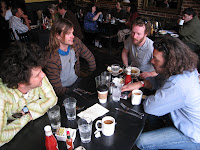 We woke up and had breakfast at one of the coolest places in the world... Mother's. The food was very tasty and I see why it's Portland's most famous little joint. Thanks to everyone at Mother's for treating us so very good.

Smitty had a brief chat with a very stiff lady and we were off to the next town...
-Kinnebrew 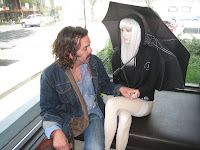