My friend Mike Farmer suddenly got a gig booking acts at this new marina bar on Old Hickory Lake in Hendersonville called Piranha's. 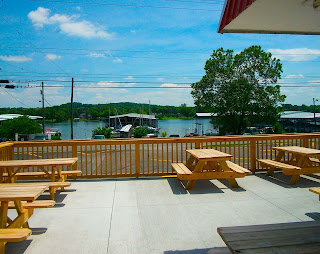 He asked me if I could play 4 hours worth of covers. It's a daunting task for anybody I'd say, but I scrounged my brain and put together a monster list of songs I kind of know. I like to say I can play half of every song. Not necessarily the good half...

Well here's what I ended up coming up with. I threw some TSCo. songs in for good measure and even some from The Chevy Downs Band, a country outfit I had in Bloomington/Indianapolis. Here's a feature "hit" from each of the 4 50-minute set lists.
Set 1
Family Tradition-Hank Williams Jr.
Can’t Hardly Wait-The Replacements
Silver Wings-Merle Haggard
The Man In Me-Bob Dylan
Oh Lonesome Me-Neil Young
Into the Mystic-Van Morrison
Will You Still Love Me Tomorrow-The Shirlles/Carole King
Heart Like a Wheel-TSCo.
Dock of the Bay-Otis Redding
Time is on My Side-Irma Thomas/Rolling Stones
You’re in My Heart-Rod Stewart
That’s Alright Mama/One Night-Elvis Presley
Island-TSCo.
Ol’ 55-Tom Waits/The Eagles

Set 2
Jesus, Heal My Hangover-Chevy Downs
Under the Boardwalk-The Drifters
Blue Eyes Crying in the Rain- Willie Nelson
Just Like Tom’s Thumb Blues-Bob Dylan
Hail Hail-TSCO
Sweet Virgina-The Rolling Stones
Roll Another Number for the Road- Neil Young
Bartender’s Blues-George Jones/James Taylor
Them Jeans-TSCO
Save the Last Dance for me-The Drifters
Life’s Little Ups and Downs-Charlie Rich
I Can’t Be Myself When I’m With You- Merle Haggard
All coming back-Tim Jones + Zach Broocke
Don’t Let me Down-The Beatles
Set 3
Out on the weekend/ I Shall Be Released-Neil Young/Bob Dylan & the Band
Back In Your love-TSCO
Pick Up My Pieces- Willie Nelson
You Ain’t Goin Nowhere-Bob Dylan
Whisky Cards and Women-Chevy Downs
Overboard/Tracks of My Tears/I’m Your Puppet-Tim Jones/Smokey Robinson/Spooner Oldham/Dan Penn
You make Me Feel Like a Natural Woman-Carole King/Aretha
Crying-Roy Orbison
The News-Old Pike
Lost Highway- Hank Williams
Tennessee Blues -Bobby Charles
Everyone Needs a Hand to Hold On To- John Cougar Mellencamp
Games People Play-Joe South

"Into the Mystic" is one that a ton of people play and Van gets flack for becoming the background music to many a yuppie's suburban dream, but the Celtic magician hits a deep place in my soul and this song always sounds right...especially near water.

"Bartender's Blues" in set 2 is amazing if for no other reason than the fact that James Taylor wrote it and George Jones made it famous. It is a perfectly written song and feels best when played at a small bar where all the bartenders can hear it and sympathize. Having had many a job in the service industry, it is the ultimate empathetic comfort and inspiration to move on at the same time.

"Tennessee Blues"
This is a newer favorite that I just started playing with my friend Foster Timms when he was last in town. It's odd because it's hard to tell if the writer, Bobby Charles, has the blues because of TN or because he misses TN. Certainly the beauty he describes -- "valleys and streams, birds in the trees, lakes that surround me" -- define what TN has been to me in the last year. Something that I think I'll always long for wherever I am.

Paul Westerberg is hands down one of the greatest American songwriters that ever lived and I think an incredibly under-rated singer as well. You know he's been every where and every person and every line he sings about. It's real. Too damn real at times, but oh so good.