Our 1:45am call time came early and most of us got NO sleep since we didn't get back to our rooms until midnight. We had to catch a flight that morning at 6am so we drove back to Camp Virginia and sat in a large room with hundreds of soldiers.

Everyone was confined to this huge room where they played old movies on a large screen. There were about 200 black leather chairs and couches and we chilled just waiting for role call.

Around 5am, still no sleep, we lined up with the soldiers and were herded onto a bus. We were wearing our body armor and carrying our bags. The bus pulled up on the flight line and when we got out we saw this huge monstrosity of a plane called a C-17. It is this plane that you always see in the movies... the thing can transport several tanks or a bunch of soldiers. More on this later.

Just when we were about to load on to the C-17, we were told that plans had changed and we were escorted back to the holding area. So close!!!!

Then we are told, around 9am, that there would be no more flights till that evening at 8pm. Sam, who was just as tired as us, led us to another area where we waited to see if we could get rooms at Camp Virginia.

We hung out on wooden benches outside for the next two hours...we were approaching thirty hours with NO SLEEP. Luckily, everything seems funnier when you are sleep deprived and we all had developed the giggles. The troops who passed by us probably thought we were insane or drunk.

Finally, around noon, Sam managed to get us a tent that we could crash inside. 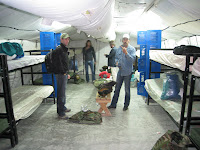 Here we are, exhausted and happy to have a place to sleep.

Man! That was some good sleep!

Sam woke us up at 7pm and we were hustled back to the waiting room. Same thing all over again. 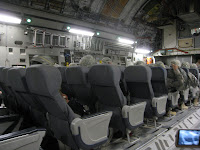 Here are the only pics I got off before being told to put the camera away.

Just to give you an idea...


We were strapped onto the walls in a giant plane with no windows. 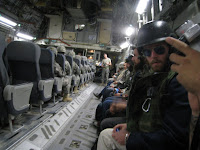 The plane took off... a beast of a machine lifted into the air, and the whole thing was very surreal. Thirty minutes later we landed in Tallil, Iraq.

We were picked up by our new escorts and driven to our CHU (Compartment Housing Unit) These were tiny trailers with no bathroom and two beds inside one little room.

Most of us went right back to sleep since we were still tired from the day before. In the middle of the night we were awakened by what we thought was the Mortar Alarm... turned out it was just two Camel Spiders fighting outside out our CHU.
Posted by Adam Grace at 2:40 PM