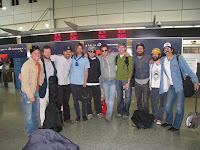 Early the next morning we left Minneapolis for a 17 hour journey by Delta to take us into Kuwait.

The flight was great and as we were coming into Kuwait I saw the most amazing thing: An asteroid entered the atmosphere and burned through the air with a bright flash of blue light. Our plane took a sharp left turn to avoid the incoming "thing".

As we got closer to landing, we could see the oil fields in Kuwait. 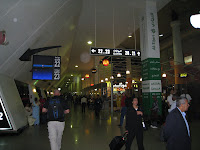 There were fires blazing on top of the oil rigs...many of them.

Here's a picture from the airport in Kuwait. As you can see, they have a McDonald's. 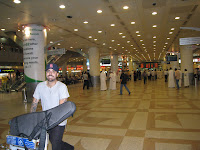 It was amazing to see the cultural differences right away. We weren't allowed to take any pictures of women there. Since women are the possessions of men, we could get in trouble for talking to, snapping pictures of, or staring at the women. 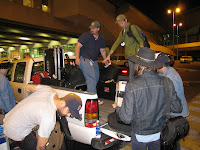 We were intercepted by our security immediately and loaded the trucks with our equipment. Then, we were off to Camp Arifjan in Kuwait. It was about an hour drive. 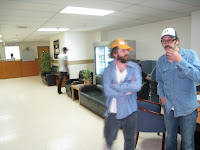 Once there we were given rooms on base and allowed to get some much needed rest. 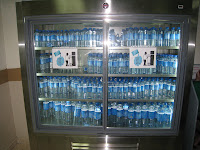 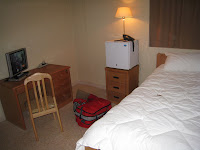 This is our rooms at Camp Arifjan. Believe me when I tell you that these are the finest they have to offer. The troops were staying in large rooms with dozens of beds pushed together while we had private "suites". 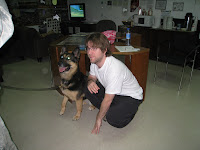 I was jet lagged and couldn't sleep so I walked around base and ran into a troop who was in charge of an attack dog. He showed me some of the dog, Gypsy's, moves. This dog could have torn me up! Gypsy sniffs out bombs and explosives and chases down bad guys.