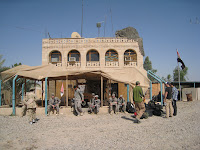 The next morning we awoke to the dog barking. The storm had passed during the night and the Blackhawks were on their way.

You don't get to say that very often! 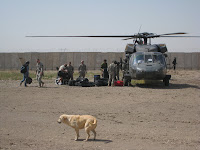 We loaded up and headed back to the palace for showers. We had two shows to do today and believe me... we needed showers. 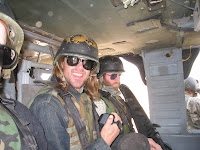 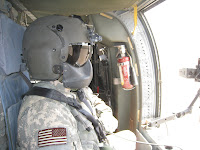 Once again the Blackhawk ride over Baghdad was amazing. 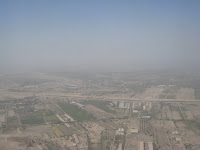 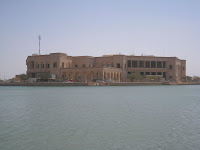 Here you can see our accomidations for the night. The palace, one of many on the property, is a hotel for the Armed Forces.


Saddam built many palaces. One for his daughter, two for his sons, one for his mother in law, one for a wedding, pretty much any reason. 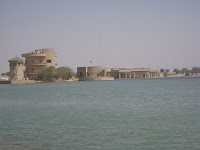 They were built and tons of water were brought in to give Saddam lakes and fountains...meanwhile the Iraqi people were dying of thirst.

We jumped on another Blackhawk and flew to another small base called Dolby. 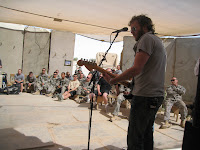 We played to a small crowd. When we finished we were told that they had set up the shooting range for us to shoot some weapons.

It only took us 10 minutes to pack up!

The troops were having a blast watching us fire these weapons. Some said it was the funniest thing they had ever seen. I don't have any pics but we do have some video which we will post later.

The Blackhawks showed up and we were a little bummed since we would have loved to shoot more weapons. 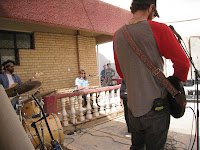 And we are off to our second and last show of the tour. 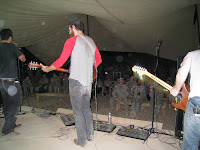 This was a highlight for us and a wave of emotions filled us all as we said goodnight. These were good guys, giving up their freedom and comfort, to protect the freedom of every American. 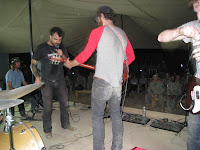 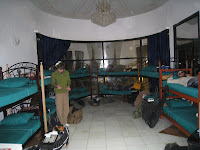 We took our final Blackhawk ride back to the palace and slept in Saddam's bedroom, converted to bunk beds.

I go t a few shots of the inside of the palace. 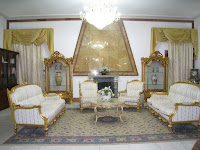 The furniture looks like gold but it's all fake gold paint and plastic. 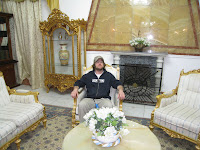 This is the actual chair that Saddam sat in when he conducted the 2003 interview with Dan Rather. 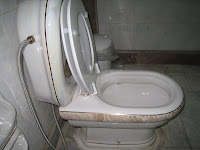 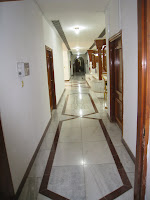 The palace was very big with a lot of fake stuff: Plastic Vases, gold paint, fake marble covering, and of course... 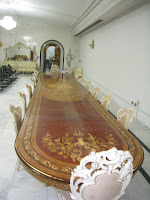 The table at which Saddam used to eat.

This night had to come to an end because we had to be up really early to catch a flight back to the good old US of A.
Posted by Adam Grace at 4:18 PM